THIRD MEETING OF THE “NO GAPS” PROJECT

Objectives of the Meeting

Read more: THIRD MEETING OF THE “NO GAPS” PROJECT

The team of the Gender Alternatives Foundation joins the welcoming words of the European Womn's Lobby President about the new Gender Equality Strategy of the European Commission issued on 05.03.2020.

Gwendoline Lefebvre, President of the European Women’s Lobby: “As President of the largest umbrella of women’s organisations in the EU, I would like to welcome the Gender Equality Strategy issued today by the European Commission. It is a great first step to accelerate progress on the rights of all women and girls throughout the EU. Now is time to turn words into action and to implement these new fresh commitments. The European Women’s Lobby will monitor closely whether the EC and EU Member States implements those promises. All women and girls in Europe are counting on our political leaders to protect them against sexism, exploitation, violence and all forms of discrimination and to offer them opportunities to fully enjoy their fundamental human rights.”

The strategy could be found here

A Be Aware project partners meeting was held in Innsbruck, Austria. Five organizations from five countries are developing special tools to combat gender-based violence in the workplace. The project partners are actively working to carry out the following activities: - an online training course for representatives of employers' companies, to increase sensitivity and to expand their competencies in dealing with sexual abuse during training and at work;

- An online training course for employees to raise awareness of the issue and make it easier to identify signs and where to find appropriate support.

International Training, dedicated to the harassment on the workplace! BE Aware! 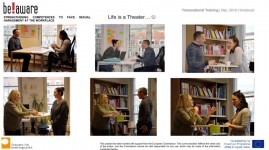 At the end of the year, an international training on gender based harassment on the workplace was held in Innsbruck (Austria). It is part of the project "BE AWARE", which will create opportunities for sexual harassment in the workplace to be identified and sanctioned. And to help his victims. The project will also help employers who annually lose their employees who leave "for unexplained reasons". Very often, these invisible causes are related with harassment between colleagues or other attacks, in most cases gender based, which most often cause victims to leave the toxic work environment. And very often, they also need extra help to overcome the mental and emotional traumas resulting from prolonged harassment on the workplace.

Surveys show that some of the employers in Bulgaria do not have any internal rules regarding harassment, insulting or sexual abuse between colleagues. This leads to the concealment and neglecting of such cases. The BE AWARE project will create tools to assist victims of sexual harassment on the workplace and encourage employers to create a more supportive and secure environment for their employees. Something that will increase their ability to work.

Read more: International Training, dedicated to the harassment on the workplace! BE Aware!