Bulgaria will be considered by the CEDAW Committee in July 2012

The combined 4th to 7th national periodic report of Republic of Bulgaria will be considered. The lack of implementation of the CEDAW Committee recommendation adopted in July 2011 (Communication No20/2008) will be discussed.

The Managing director of Gender Alternatives Foundation will take part in the session and will present the Alternative report "Substantive equality and non-discrimination in Bulgaria''.


To see the report and the GAF recommendations, please refer to the fail .

European conference in Sofia to study links between prostitution and trafficking

[Brussels, 21 June 2012] The Bulgarian Women’s Lobby (BWL) and the European Women’s Lobby (EWL), the largest coalition of women’s NGOs in Europe, will on 13 July host a European conference on “Trafficking in women and prostitution: Bulgarian and European perspectives”.

The conference is foreseen as a concrete political and awareness raising event for the two women’s organisations and will give a key opportunity for Bulgarian stakeholders, politicians, professionals and NGOs, to get in-depth knowledge on the issue of trafficking in women and prostitution, both at Bulgarian and European level, and discuss possible ways forward, based on the experience developed in other EU countries.

Read more: European conference in Sofia to study links between prostitution and trafficking

On 21-22 May 2012, the GAF Coordinator Rada Elenkova was invited as a volunteer of You Act to join with other representatives from the SRHR movement worldwide for a strategy workshop entitled “Advancing the SRHR agenda beyond 2014 and 2015: Forging a CSOs consensus to advocate within the ICPD and MDGs review”. 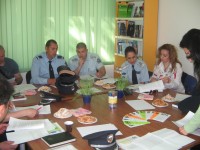 The Gender Alternatives Foundation and the police officers from the 6 local Police Departments in Plovdiv set up a Working Meeting to discuss the most burning issues when it comes to domestic violence cases.

Discrimination is illegal. Fight it.

Wish you could hide your disability to get a promotion?

Wish you could hide your age to get a job?

Do you have to hide your sexual orientation at work?