In relation to prevention of domestic violence and popularization of the fundamental human rights, GAF's coordinator took part in a discussion organized by the Civic Competences Club "I have rights, I bear responisbilities" which is part of "N. Vaptsarov" Secondary School in Plovdiv. 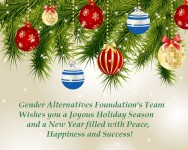 “16 Days of Activism against Gender Based Violence” in Plovdiv

27.11.2012, 10.00 a.m. – Start of the Campaign: a press conference with the participation of GAF representatives and Mrs. Nadia Taneva – Director of  Social Assistance Directorate – Plovdiv. Location: BTA. Representatives of the media in Plovdiv are invited.

30.11.2012, 10.00 – 12.00 – Free consultations provided by Milena Kadieva /attorney at law/ in favor of women in need of legal defense in the framework of international cases: how to file a complaint with the European court of human rights in Strasbourg. Location: Plovdiv, 38 “4th of January”, entrance “B”, 2 floor, app.3. Citizens are invited.

1.12.2012, 13.30 – 20.00 – Participation of Rada Elenkova in TEDxMladostWomen – part of a global conference bringing together hundreds of women and girls from all over the world whose ideas challenge and alter the traditional gender roles and stereotypes. Location: Arena cinema Mladost, Sofia.

The 14th WAVE Conference and the GAF participation

The 14th WAVE Conference (Women Against Violence Europe)  was organized in London between 17th and 20th of October 2012.

Read more: The 14th WAVE Conference and the GAF participation