SECOND MEETING OF THE “POWER UP” PROJECT

On the 12.05.2020 it was organized the second partnership meeting of the project "Power Up - Empowering and Upskilling women with a migrant background to foster their social and labour inclusion” (2019-1-BG01-KA204-062546). The initiative is co-funded by the Erasmus+ Programme of the European Union. Due to the emergency situation related with the COVID-19, the meeting was held online. The partnership consortium consists of four EU organizations – Gender Alternatives Foundation (BG), Solidaridad sin Fronteras (ES), Mindshift (PT) and Matertera (CZ).

Read more: SECOND MEETING OF THE “POWER UP” PROJECT

The GA Foundation has been accepted as a member of the European Network for Combating Violence against Women and Children WAVE!

WAVE adheres to the goals of the United Nations, emphasizing the importance of working to end all forms of violence against women and children in public and private life in accordance with the Vienna Declaration, the Declaration on Violence against Women, the Beijing Platform for Action and all others. related documents.

GA Foundation (Gender Alternatives Foundation) is an official member of the WAVE Network from 18.05.2020. Thank you for your trust, colleagues!

The BASE programme is a learning program that aims at:

THIRD MEETING OF THE “NO GAPS” PROJECT 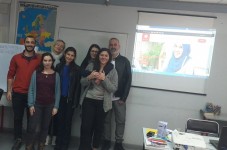 Objectives of the Meeting

Read more: THIRD MEETING OF THE “NO GAPS” PROJECT