Concluding Meeting on STOP Project on Violence against Girls and Women! 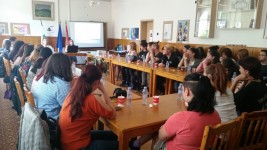 On 18th of May, 2018 in the branch “Paisiy Hilendarski” University in Smolyan city was held a Round Table on "No violence against girls and women" and a discussion on the presentation of the Council of Europe Convention on the Prevention and Combating of Violence over women and domestic violence. The event is part of the project of the Women's Club "Rodopchanka" -  Smolyan city, which is funded by the Bulgarian Women's Fund (BFZ). A guest lecturer was a lawyer  Milena Kadieva from the Gender Alternatives Foundation, who shared good practices, made an analysis of the legislation on the subject and presented the accents of the Convention.

A competition for drawings, photographs and posters on the topic "STOP of violence against girls and women!" was carried out among the students from the Vocational School of Applied Arts – Smolyan city. After the discussion was opened an exhibition with the received works, the results of the competition were announced and the distinguished students were awarded.

In the implementation of the project activities, a leaflet with basic accents from the Council of Europe Convention on the Prevention and Combating of Violence against Women and Domestic Violence was prepared, printed and distributed. The publication is marked by the assistance of the BFZ as a financing institution of the project, as well as pictures of the competition, centers and telephones for support in case of violence. The project lasts 2 months and ends at the end of May. The total budget of the project is BGN 1,500.