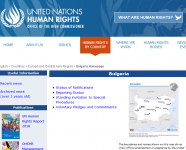 It is a fact that the UN recognizes as a great success and a great step forward in protecting the rights of women and children, adopted in 2019. Social Services Act. For some reason in February 2020. the representatives of Bulgaria before the UN Committee did not say that on 20.12.2019. the law was postponed and instead of coming into force on 01/01/2020, it was postponed to 01/07/2020. Later, the Constitutional Court was also brought before the court, with doubts that this law, for which Bulgaria was praised in the UN report, may be contrary to the Bulgarian Constitution. His fate is not clear, but by the time of the UN Committee meeting in February, the Social Services Act had certainly not come into force, and the committee members knew it because they were representatives of state institutions.

There are many points on which the UN makes its recommendations. Discriminatory practices against married women are reported and an example is given of the fact that, for example, average bodily harm caused by spouses is not investigated by the Prosecutor's Office. Thus, the Penal Code directly discriminates against married women, placing them in a less favorable position than unmarried women.

Emphasis is also placed on combating early marriages, cohabiting with girls under 16, early pregnancy and childbirth. Issues that the UN Committee has linked to the lack of a compulsory subject in the school's sexual health and rights program, and the lack of teacher training in that subject.

Expect a thorough analysis of the UN CEDAW Committee document as well as a comprehensive translation soon on the YES Foundation website.

The full English text can be found here.