On 10.11.2020 The team of the Gender Alternatives Foundation held an online event to disseminate the results of the project "No Gaps - a transnational methodology for social and labor intervention with young women seeking asylum and refugees" (2018-2-ESO2-KA205-011654).

The event brought together 23 representatives from local and national institutions working in the areas of equality between women and men, violence against women and direct work with the integration of vulnerable groups. These were experts from the Ministry of Labor and Social Policy, Plovdiv University "Paisii Hilendarski", Plovdiv Municipality, Social Assistance Directorates - Plovdiv, Asenovgrad, Karlovo, Stamboliyski, Hissarya and others.

Read more: Multiplier event for dissemination of the results of the project "No Gaps - transnational...

Training for professionals - part of the project No Gaps 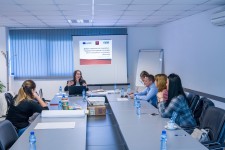 The team of the GAF held a pilot training for professionals on the 17th of October 2020 in Plovdiv. The training was part of the project No Gaps - Transnational methodology for socio-labour intervention with young women asylum seekers and refugees” (2018-2-ESO2-KA205-011654), funded under the Erasmus+ Programme of the European Union.

Read more: Training for professionals - part of the project No Gaps

SECOND MEETING OF THE “POWER UP” PROJECT 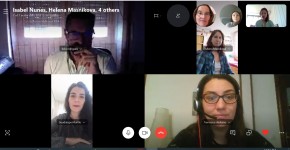 On the 12.05.2020 it was organized the second partnership meeting of the project "Power Up - Empowering and Upskilling women with a migrant background to foster their social and labour inclusion” (2019-1-BG01-KA204-062546). The initiative is co-funded by the Erasmus+ Programme of the European Union. Due to the emergency situation related with the COVID-19, the meeting was held online. The partnership consortium consists of four EU organizations – Gender Alternatives Foundation (BG), Solidaridad sin Fronteras (ES), Mindshift (PT) and Matertera (CZ).

Read more: SECOND MEETING OF THE “POWER UP” PROJECT

The GA Foundation has been accepted as a member of the European Network for Combating Violence against Women and Children WAVE!

WAVE adheres to the goals of the United Nations, emphasizing the importance of working to end all forms of violence against women and children in public and private life in accordance with the Vienna Declaration, the Declaration on Violence against Women, the Beijing Platform for Action and all others. related documents.

GA Foundation (Gender Alternatives Foundation) is an official member of the WAVE Network from 18.05.2020. Thank you for your trust, colleagues!